Robert Bissell grew up on a farm in Somerset, England, where animals, Celtic legends and panoramic landscapes were part of his daily life. His keen interest in visuals began at an early age, documenting life through his photography practice. 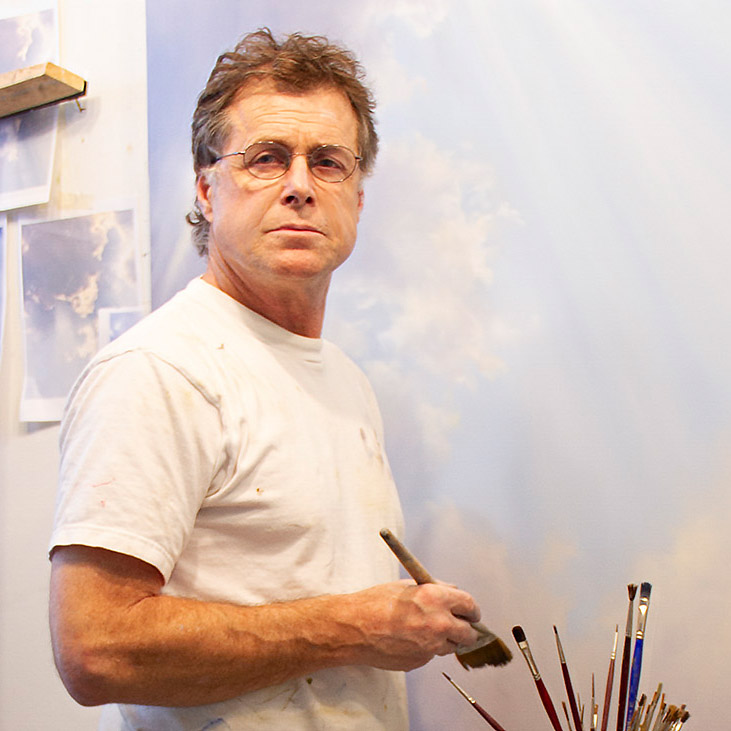 Robert Bissell developed his unique style of allegorical animal paintings in the late 1990’s. In 2012 he began to create paintings directly from his landscape photography discipline. Both genres of painting reflect the human condition and its relation to the natural world.

Bissell studied at the Manchester Art College and the Royal College of Art in London. Bissell then spent four years traveling the world, working on cruise ships to pay his way. For the next 15 years he worked as an advertising photographer and creative director in San Francisco. After burning out in the advertising business he began to paint for himself, exploring the local landscape and introducing animals into allegorical interpretations of his imagined narratives. More recently he has been painting realist landscapes in oils based on his own photography. He regularly exhibits in museums and galleries across the United States and Europe.

IR: Did you draw well as a child or did it come much later?

Robert: Yes, I have enjoyed drawing since an early age.

IR: What is your source of inspiration?

Robert: Nature and the world around me.

IR: How does an idea for a painting starts?

Robert: Ideas flow at any time and for unknown reasons, but often during my long walks in nature and also when reading magazines and watching TV. 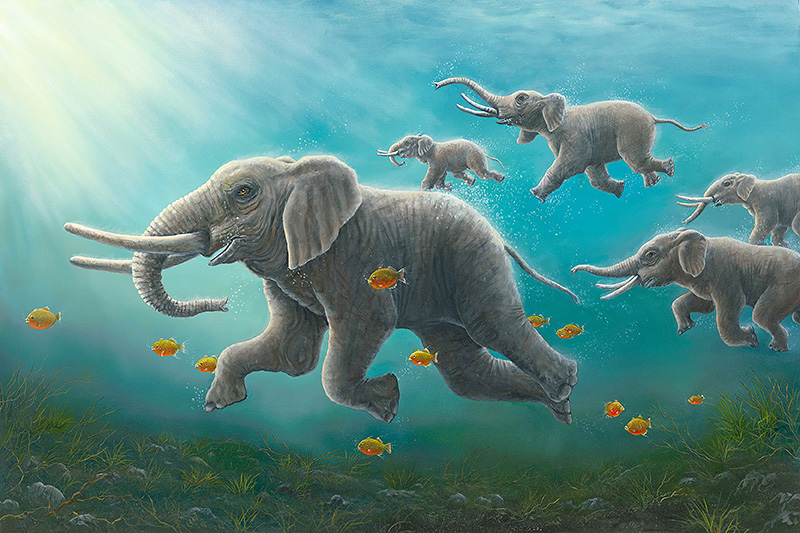 IR: You use a fine technique of painting. Where did you learn that?

Robert: I was trained as a photographer so I have a keen sense of composition but I am a self-taught painter and I continue to learn more every day.

IR: What inspired you to paint from the beginning? How has it changed today?

Robert: I wanted to say something about the human condition and our relationship to the natural world. I started painting because I wanted to create the images with my hands rather than using a camera or a computer device.

IR: When did you discover that you could make a living out of painting?

Robert: I started painting landscapes but would often include an animal. People were very attracted to the ones with the animals, so I began to make narratives with them and then the galleries became interested in selling the paintings. 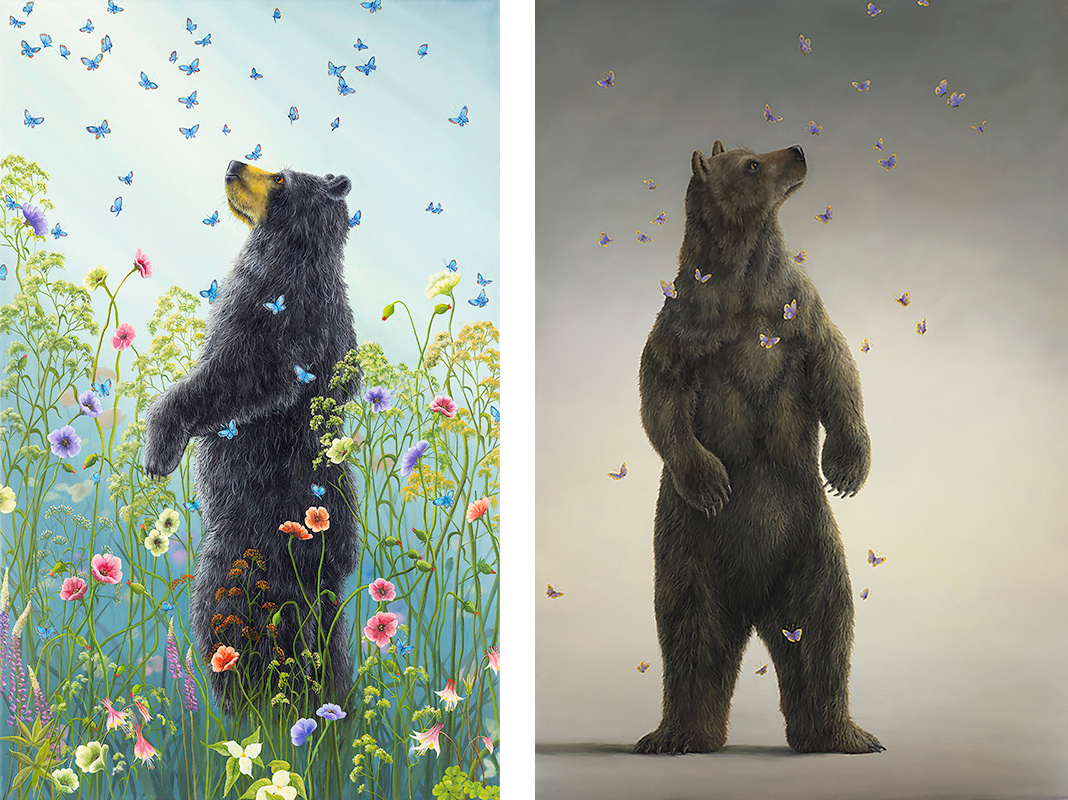 IR: Animals are an important part of your paintings, but bears, rabbits and elephants in particular are often seen in your work, often surrounded by butterflies. Can you tell us more about that?

Robert: I soon found out that viewers were interested or drawn mostly to the animals such as bears, rabbits, elephants. These are the animals we grow up with and know when we are small children, so they are a big part of our psyche. 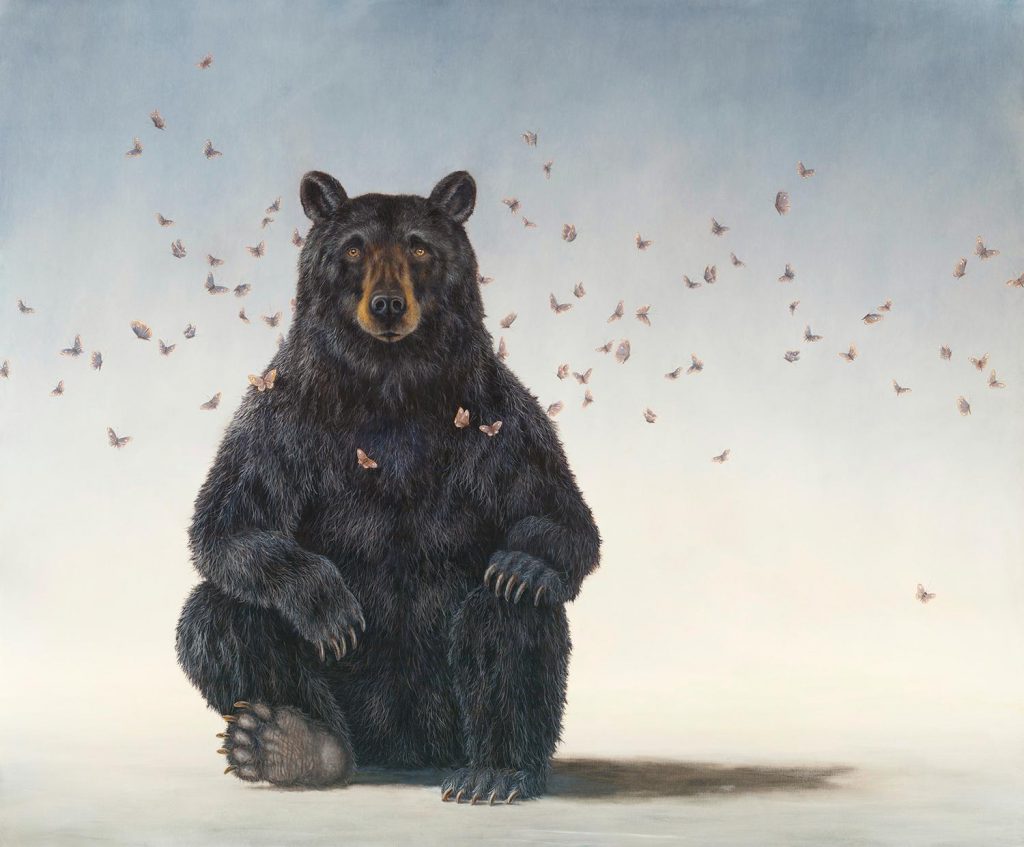 IR: If you had to single out one piece that correlates to a sentiment within yourself, which would it be and why?

IR: Is music important to you when you paint?. If so, what kind of music do you prefer?

Robert: I play very minimalistic music without words that can support a “flow” state of mind

IR: You have worked as an advertising photographer and creative director for a long time. What ensured that you started painting full time?

Robert: This was I way for me to make a living after leaving art school but I had had to give up my art. The commercial work became more and more about business and relying on technology for results. I decided I did not want to be in front of a screen for the rest of my life and I needed to get back to my art.

IR: You have lived and worked in SF for a long time but recently moved to London. Did you miss your native country?

Robert: Yes I missed the English countryside and wanted to be close to Europe to travel more in this part of the world.

IR: What is the best and worst thing about your profession as an artist?

Robert: It is very satisfying to have people enjoy my work and want to live with a piece of my art, but it is also quite difficult to make a living. The world of art sales is very competitive and working with different galleries can be difficult for a creative brain.

IR: Which old masters do you admire?

Robert: Caspar David Friedrich and the Hudson Valley painters from the 19th century.

IR: Are there also contemporary artists that you can appreciate?

IR: If you had to choose a painting (from a museum) that everyone should have seen, which painting is it and why?

Robert: It is a very small painting from the Getty Museum by Caspar David Fiedrich titled A Walk at Dusk. This painting depicts a man towards the end of his life contemplating an ancient burial site. The painting says much about looking back on a life lived and looking forward perhaps to a renewed life. As a viewer you are called upon to reflect on your own life and what is has meant to others.

IR: What do you think about limited reproductions of your work?

Robert: These are a way for people to collect my work at a price that is affordable for them. Any quality reproduction of my work allows me to communicate my ideas to a wider audience which makes me happy.

IR: If you had to start over, would you choose a different path in your career?

Robert: I really don’t think about this. I am content with what has been and what is.

IR: Thank you for this interview Robert

Do you like Robert Bissell’s artwork?
Check out what’s in store.