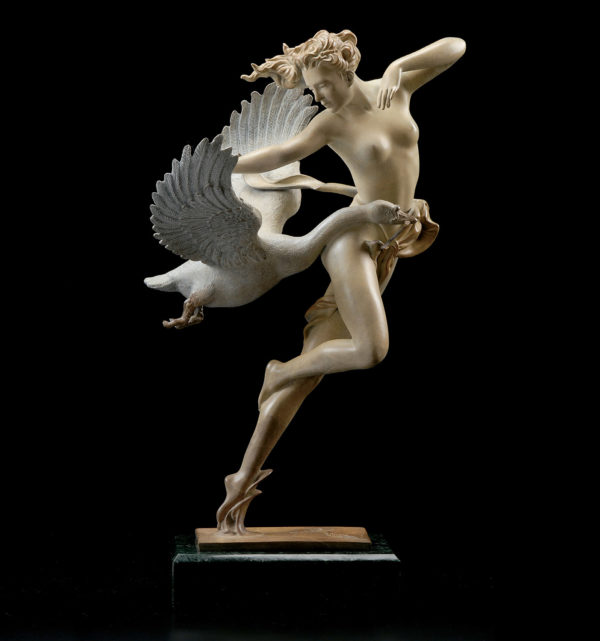 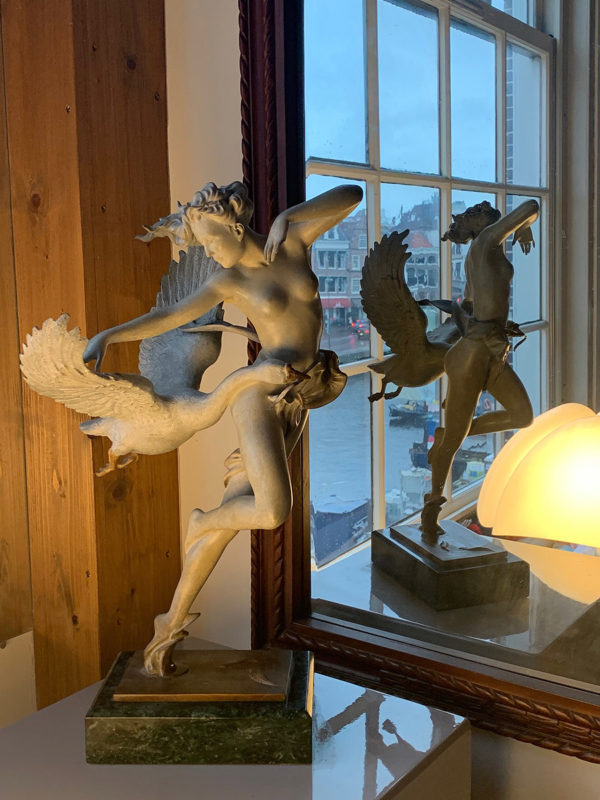 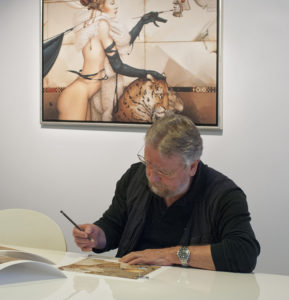 Night Flight from Michael Parkes started life as a painting and was later also realized as a bronze sculpture. The subject is a part of a fairy tale that Michael used to tell his daughter about the world of the swan kingdom. In pursuit of the Unknowable, the swan princess is encouraged by the swans to fly. Until ultimately, like Castaneda’s leaping from the cliff, she will learn to shift from matter into spirit and back again as we all must do eventually. (Castaneda was a contemporary writer who lived in Mexico and the US and wrote numerous books about his life as a student of the old shamanistic traditions going back to the ancient Aztecs. At one point as an apprentice, he was told to leap off a cliff by his master. He was terrified yet followed his master’s orders, only to find out that he actually could fly.)

The bronze sculptures of Michael Parkes are born in Florence where he collaborates with none other than Piero Bertelli who is one of the best professionals in this field in Italy. Michael Parkes uses the Lost Wax technique for creating models that are later cast in bronze. Instead of soft wax he uses hard wax so he can express the finest details. Which is visible in the wings of his angel sculptures for instance. His process always starts with sketching after which the model is made by hand. If the model is ready he creates a counter- mold which serves as the basis for the eventual bronze casting. The final bronze statue is refined and polished and fitted with various patinas which give it its color. Michael Parkes bronze sculptures are available in classic dark brown color called ” Patino Classico or Florentine Patina” or in the more colorful variant “Custom Patina”. With the more colorful patinas Parkes wants to show techniques that were used a lot in history but are not regularly seen anymore because they require tremendous skill and are very time consuming.

Michael Parkes on his sculptures: “There had always been somewhere inside of me the need to make sculpture. I thought about it for years before I finally mustered up the courage to see if I really had the makings of a sculptor. So, on my 50th birthday, with no previous experience, I located a foundry in Florence, Italy and began work on my first models. I believe birthdays are for trying new and scary things, but I had no idea what a wonderful door this birthday would open. In the beginning I would create one or two sculptures a year because I still had other commitments, mainly to painting and stone lithography. However, when my work in stone lithography came to a conclusion several years ago, my interest immediately turned to sculpture with increased intensity. It is clear now that the women and creatures I have been painting and drawing through the years have just been waiting to come to life in 3D.”

A purchase of a Michael Parkes sculpture is always a stable investment. It is an asset to any art collection..