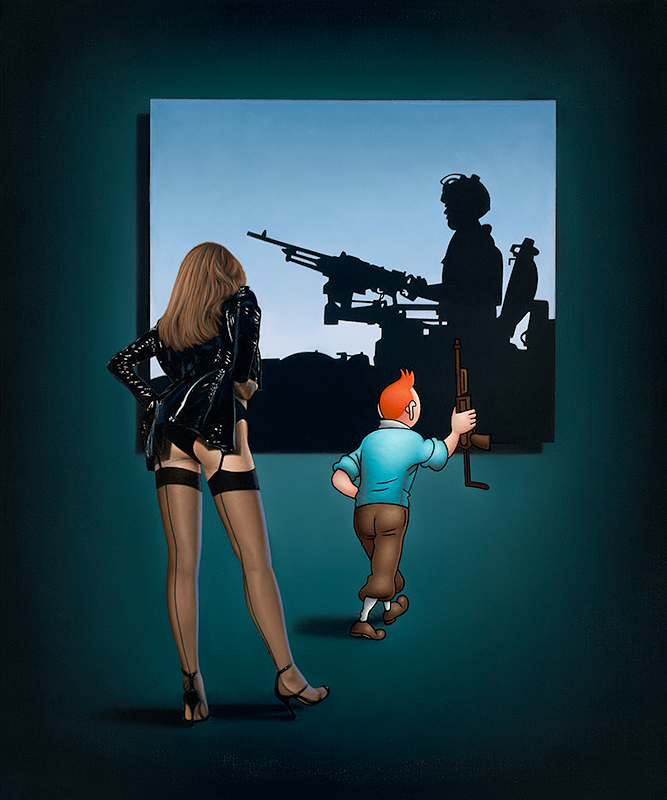 Ole Ahlberg has created a universe where the baroque vanitas symbols. Symbols Such as, peeled lemons, hourglasses, unlit candles, and skulls have been replaced by a more contemporary repertoire.

“There is more between heaven and earth than anywhere else.”

The most obvious difference being between things and people from the ‘real’ world contra comic strip characters. His many scantily-clad women, swans, porcelain objects, and clouds are painted in a very convincing life-like manner while the comic strip characters, mainly taken from Herge’s Tintin, are painted with a clearly defined outline that makes them appear flat on the canvas. A difference that is almost tangible.

If Ole Ahlberg’s principles of composition have changed, his motifs have essentially stayed the same: it is mostly still about eroticism. Being a very sophisticated artist, he never allows the pictures to become too lewd or carnal in nature, but somehow he finds a way to get the viewer, to a great extent, to create the suggestive stories. Eroticism is usually also just a pretext for political commentary and a deeper epistemological investigation. In this respect Ole Ahlberg prefers the black humor and mysteriousness of Magritte than the theatricality and surrealism of Dalí­.