What is unusual about Michael Parkes is that in his images metaphysical and spiritual elements are joined into reality. His work evokes a mysterious atmosphere, which can often only be deciphered with the help of ancient mythology and eastern philosophy. 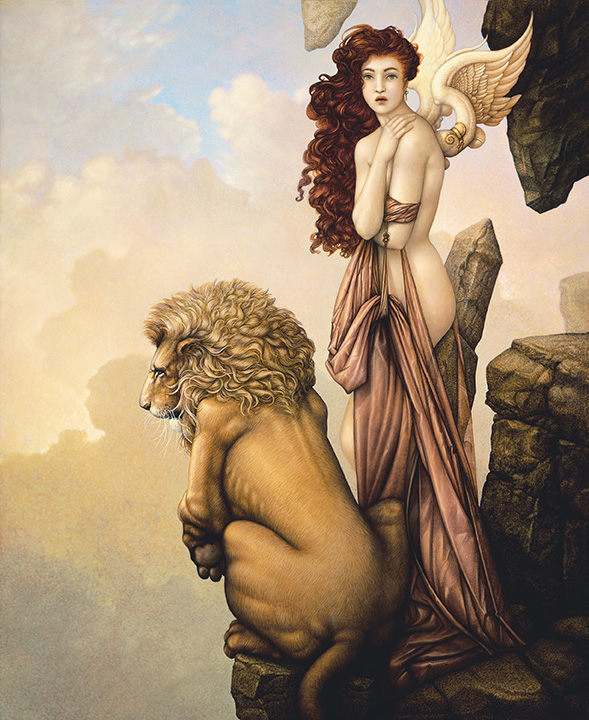 In the fantasy world of Parkes, the laws of earthly reality are abolished, and space and time enter into their own motionless communion. It is tempting to speak of a dream world with Parkes, if it were not for the fact that the ‘dream world’ of Michael Parkes surpasses all of our dreams in audacity, freedom and intensity. In short, in Michael Parkes, the figurative art of our age has found a new, fascinating and extremely authentic exponent.

“I want to put the viewer in a timeless space so that one is unsure whether you are a hundred years in the future or a thousand years in the past, but it is a place you want to enter and explore.”

Born in 1944, Michael Parkes studied graphic art and painting at the University of Kansas and then traveled for three years through Asia and Europe. In 1975, Michael Parkes settled in Spain, where he now lives. Throughout his career, numerous international exhibitions underline the importance of Parkes’ work. Michael Parkes is both a uniquely talented painter and master of the art of original stone lithography.

He is a painter, a sculptor, and a stone lithographer.  His more than 30 years of success as a fine artist stand out in the art world, where fewer than 1% of artists ever achieve success in both the primary and secondary markets.  Parkes’ works are collected by celebrities, important private collectors, and museums around the world, and his body of work has stood the test of time.  That being said, Parkes’ continues to create new works, all of which are widely sought after.